When I made the pattern for the hat, I also thought about making a pattern for mittens to match. Here it is, hope you enjoy it! 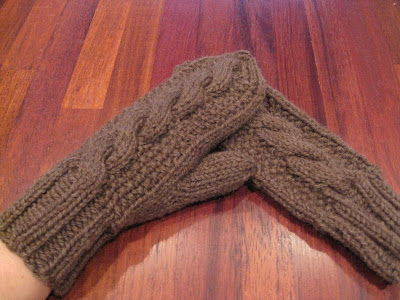 Knit one row and at the same time increase 4 sts. You now have 32 sts.

When you’ve knitted 4 rounds of the pattern it’s time to do the cabling:

Seedstitch over the 4 first sts, put 4 sts on a cableneedle and hold to the front, knit 4 sts and then the stitches from the cableneedle, and end with 4 sts of seedstitch.

Onwards you now knit 8 rounds of pattern between every cableround.

When you have 13 rows of stockinette stitch from the rib inside the hand, you do like this:

Keep doing this until you have 8 sts left. Fasten off.

Pick up the sts from the scrap yarn or safety pin, pick up 1 stitch in each side and 6 sts at the back of the thumb – 14 sts in total.

Knit until the thumb is long enough, I knitted 13 rounds.

Then k2tog 7 times. Pull yarn through and fasten off.

Voila, you have one mitten and it’s time to make one more!!!

-
These patterns are my design and is for non-commercial use only. However, you are free to make as many of them as you like for personal use.
Lagt inn av MirreVirre kl. 04:00

If you have any questions, don't hesitate to contact me. My emailadress is:
mirrevirrehobby@yahoo.no